The Donbass negotiations are stuck in the mud. Neither the Normandy format nor the contact group are able to agree on anything, writes Kommersant. In this context, Kiev is betting on aid from the West, trying to persuade NATO to accept Ukraine’s membership in the alliance. According to the newspaper, the events currently unfolding are starting to resemble the situation that developed in 2008 before the war in another hot spot – South Ossetia.

The latest report of the OSCE Special Observation Mission, dated April 3, shows a notable increase in ceasefire violations in the Donbass. There were 594 violations in the Donetsk region and 427 violations in Lugansk. Due to this exacerbation, on April 6, Kiev requested an emergency meeting of the Trilateral Contact Group (TCG) to resolve the situation in eastern Ukraine. However, the chances that the negotiations initiated by Ukraine will take place are slim, according to Kommersant sources.

While negotiations have stalled, Ukraine has focused on dragging the West into the conflict, and NATO in particular, writes Kommersant. Special efforts are directed towards NATO. Ukrainian President Vladimir Zelensky believes that NATO is the only way to end the war in Donbass. However, talks on Ukraine’s NATO membership, judging by Washington’s comments, have not produced the result Kiev wanted, according to the newspaper.

The latest events around Donbass look like 2008, when Georgian President Mikhail Saakashvili also actively sought to join NATO. Instead of a membership action plan, at the time, Ukraine and Georgia received assurances from NATO that they would become members of the alliance. After that, the conflicts in South Ossetia and Abkhazia began to escalate rapidly, and it all ended with the August war and the recognition of the independence of Abkhazia and South Ossetia. , writes Kommersant.

Vedomosti: the second flop of the Suez Canal calls into question the reliability of the waterway

Just a week after the container ship Ever Given was bailed out after running aground in the Suez Canal, the tanker Minerva Nike found itself in a similar dilemma in the southern part of the waterway. The consequences of the second incident were resolved immediately, but the question of choosing alternative routes for international logistics is becoming increasingly acute, writes Vedomosti. That said, Russian railways could benefit from the situation.

The commercial turnover between China and the countries of the EU is constantly increasing. Last year, Beijing became Brussels’ main trading partner, beating the United States. Under the current conditions, it is essential to make these deliveries faster and more reliable, and in this sense, the overland routes through Russia have already demonstrated their high efficiency, according to the newspaper. “The speed of container delivery in the main directions is on average 1,100 to 1,200 km per day, taking into account the crossing of all borders. Concretely, from China to Europe, delivery takes 12 to 14 days. It is much faster than sea transport, road transport, and is comparable to aviation, ”Russian Railways told Vedomosti.

In the future, another international route could be launched: the North-South transport corridor connecting India, Iran and Russia, which can become an effective alternative to the Suez Canal. Experts interviewed by Vedomosti generally support the idea of ​​creating new transport corridors and strengthening existing ones. At the same time, the head of the Rail Freight division for EU and China of the AsstrA group of companies, Vladislav Martin, noted that the main difficulty of the North-South axis is that Iran will become one key links in the transport chain, which may trigger complications with Western partners in the future.

However, the question remains open whether Russia and its partners will have the time to implement their plans faster than their competitors. For example, Israel and the United Arab Emirates have launched a project to modernize the port of Eilat and connect Israel to the Middle East transport network.

Izvestia: JCPOA actors try to save Iran nuclear deal thanks to expert consultations

Participants in the Iran nuclear deal have started to resuscitate the deal. Two expert groups were formed in Vienna tasked with lifting Washington’s sanctions against Tehran and returning Iran to its obligations under the deal. In addition, in the near future, indirect negotiations between Iran and the United States will begin. The experts interviewed by Izvestia positively assessed the start of the consultations. Now the question is how fast and efficient the rehabilitation of the JCPOA will be.

The expert community views the results of the ongoing consultations with cautious optimism, Hamidreza Azizi, visiting scholar at the German Institute for International Security Affairs (SWP) in Berlin, said in an interview with Izvestia. The decision of Iran and the United States to join this diplomatic process is a positive sign. So far there is no question of an immediate restoration of the JCPOA, so the only option now is a gradual return to it.

The indirect talks between Tehran and Washington, which are expected to follow the current meeting, have raised high hopes, writes Izvestia. These contacts imply that the representatives of the two countries will communicate through intermediaries.

Experts noted that the current situation is fundamentally different from what developed in 2018 when Washington announced its withdrawal from the agreement. “Donald Trump’s administration has imposed many new sanctions on Iran, and not all of them have to do with the nuclear issue. Some have to do with human rights, others with support for terrorism. So the question is, how to handle these measures, “said Andrey Baklitsky. , senior researcher at MGIMO University, in an interview with the newspaper.

China has become the largest sovereign creditor of post-Soviet countries after Russia, according to a World Bank report. In total, Beijing has financed the republics of the former USSR to the tune of 6.6 billion dollars. China has provided most of the loans to Belarus ($ 3.5 billion), Kyrgyzstan ($ 1.8 billion) and Tajikistan ($ 1.1 billion). According to experts interviewed by Izvestia, the myth of China’s imperial ambitions, including in the post-Soviet space, is exaggerated, so from a political point of view the risks for Russia are not very high. However, when it comes to business activity, it is likely that China will kick Russian companies out of these countries.

The dominant role of Russia and China as creditors of the region is expected. The two states are more economically linked to the post-Soviet space than the others and are largely at the top of the list of their trading partners. China’s interest in Central Asia is quite understandable and predictable. A branch of the New Silk Road is being laid across this region, and Kyrgyzstan and Tajikistan will serve as a key link with Tibet, RANEPA’s Vladimir Klimanov told Izvestia.

For Russia, the strengthening of Beijing in the post-Soviet space creates commercial risks rather than political ones. Disputes between Russian and Chinese companies over the implementation of certain projects are inevitable, the newspaper writes.

China is gradually becoming the most important partner of Central Asian countries, said Alexander Gabuev, who chairs the Russia in Asia-Pacific program at the Carnegie Moscow Center. This is a completely natural trend that has gained momentum over the past few decades. From a geopolitical point of view, the strengthening of China in the post-Soviet space should not pose a serious threat to Russia, although Moscow’s cultural influence is decreasing, it is still quite large, moreover, states themselves are more suspicious of China than Russia.

Russian authorities are once again concerned about the country’s epidemiological situation due to the spread of the coronavirus. Prime Minister Mikhail Mishustine on Tuesday said the virus had not receded and called for additional measures to protect Russians by Friday. Experts interviewed by Kommersant associate the possible third wave primarily with low vaccination rates and in part with the high infection rate of new mutations.

The chief physician of the Leader-Medicine medical center, infectious disease specialist Evgeny Timakov, calls the authorities’ fears “fair”. In an interview with Kommersant, he clarified that “in all scenarios of the epidemiological situation”, the virus needs about two months to start to actively multiply. Thus, according to the specialist, the number of detected cases of the British strain in Russia could increase in mid-April. In addition, he continued, it is to be expected that people who were sick a year ago and have lost their immunity will be infected again.

At the same time, the head of the laboratory of the Institute of Molecular Genetics of the Russian Academy of Sciences, Konstantin Severinov, believes that there may be many more cases of new strains in Russia than official data shows. ‘indicate. According to him, in order to reliably detect these mutations, it is necessary to have a developed system for whole-genome sequencing of variants of the virus, which is “limited” in Russia.

The director of the Intelligent Logistics Center of St. Petersburg State University, Viktor Zakharov, one of the authors of the mathematical model of the spread of COVID-19 in Russia, has linked the possibility of a third wave to a “inactive” vaccination campaign.

The health ministry confirmed to the newspaper that the situation with the coronavirus “remains tense”, but the department is confident in the effectiveness of Russian vaccines.

TASS is not responsible for the material cited in these press reviews. 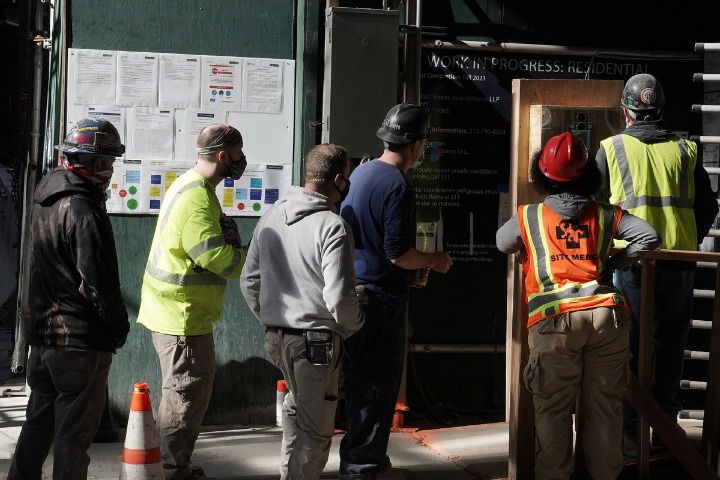